For a complete review of both The Dean Martin Christmas Special and the new 17-DVD Dean’s Ultimate Collection, click HERE 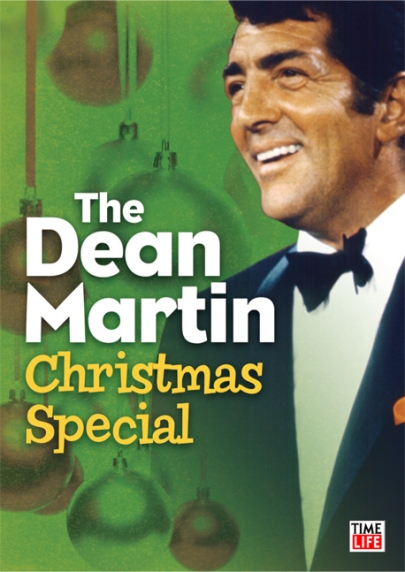 A WINTER ROMANCE: For those looking to spread the kind of holiday cheer that made The Dean Martin Show a treat for all seasons, Time-Life is presenting the DVD debut of the series’ Christmas episode from December 1968, which can be purchased either on its own, or as part of a new giant boxed set, described below.

It may not even yet be fall, but for fans of The Dean Martin Show, it’s beginning to look a lot like Christmas. That’s because we’ve just received word that on the eve of Halloween, and only days before Americans go to the polls to cast their ballots in the Presidential election, two new candidates selected from Dean’s weekly TV party will begin vying for our attention — and both will come bearing a shiny new yuletide present in an effort to snag our vote.

For starters, Time-Life has gathered together all three of the Dean Martin Show treasuries that the company has released to date, bundled them with a trio of appealing extras, and placed them all in a big 17-disc boxed set that they’re calling The Best Of The Dean Martin Variety Show: Dean’s Ultimate Collection, due out October 30.

Inside the package will be:

2) the 6 DVDs of the second set, King Of Cool, which came out last November;

3) the 3 platters containing the Uncut episodes that went on sale this past May.

The three stocking stuffers that top off this Dino extravaganza are:

1) a bonus disc, comprising three additional Dean Martin Show episodes, that had been available ONLY as part of the special 7-DVD King of Cool editions that up until now have been sold exclusively through Costco stores (as with the other episodes in the King of Cool collection, those on the bonus disc are edited, but nonetheless entertaining);

2) a condensed softcover version of the photo book that had earlier been obtainable only in conjunction with the Dean Martin: Cool Then, Cool Now CD compilation, released in June 2011;

3) a brand new DVD featuring the never-before-reissued December 19, 1968 Christmas episode of The Dean Martin Show, with guest stars Dennis Weaver, Bob Newhart, Dom DeLuise, and The Golddiggers (this particular group of gals includes a number who had appeared in the very first Golddiggers series that premiered in the summer of ’68).
o

I CAN’T GIVE YOU ANYTHING BUT DEAN: A bounty for the DM Show enthusiast who wants its all (or wants to share the experience with others), Dean’s Ultimate Collection combines all of the previous Time-Life releases of Dean Martin Show DVDs with a newly-restored Christmas episode and two more extras, all in a deluxe boxed set.

The 1968 Christmas special will also be marketed as a standalone item, providing a money-saving option for those who already own the first three Time-Life collections or those who simply want a single, Christmas-themed Dean Martin Show.

We’ve been given to understand that the ’68 Christmas episode will be minus some of its original musical content, but we don’t yet know what’s been left in or what’s been cut.

And while we’re aware that many were hoping to finally see the release of the cherished 1967 episode commonly known as “Christmas with The Martins and The Sinatras” — in fact, a couple of other websites had erroneously speculated that it would be the Christmas show featured on the new T-L DVD — we’ve been told by authoritative sources that the rights to the ’67 program remain out of reach at this juncture. So, in light of that, a vintage Christmastime show from the following year may well be the next best gift that Santa could put under a Dean Martin fan’s tree.

What’s more, Dinophiles should certainly take heart from this promising piece of news: The Golddiggers Super Site has learned that there will DEFINITELY be more Dean Martin Show DVDs to come. And as we’ve noted in the past, your support for the current and forthcoming titles will be vital in ensuring how much of that future product will come to market, as well as how complete it will be.

We’ll provide a thorough overview of the just-announced releases as soon as they’re made available to us. In the meantime, to be certain that you stay informed of the latest developments relating to the DVDs, Dean, The Golddiggers, and The Dingaling Sisters, we invite you to join the many Dean Martin Show alumnae and aficionados who already LIKE our Dean, Golds and Dings Facebook page:

Our thanks to regular Dean, Golds and Dings participant Richard Wierzbowski for his contribution to this report.