Blue Skies Ahead For Soulful Eyeful

Movement on the release of full, uncut episodes of The Dean Martin Show may be stalled for now, but that’s hardly holding back two vivacious performers from that series, on the brink of blazing exciting new trails in their careers.

News of their nascent venture first surfaced on the Super Site…Then they wowed ’em in Washington…And now, even bigger opportunities beckon for Blue Eyed Soul.

The reunion of Michelle DellaFave — one of the most recognized members of The Golddiggers and one of the four original members of spin-off group The Dingaling Sisters — with Lindsay Bloom — the last performer hired for The Dings and who, with Michelle, was there for the foursome’s final curtain call — caused such a sensation when their newly-formed duo Blue Eyed Soul made its debut at the 25th Anniversary of the Vietnam Veterans Memorial Wall that demand immediately began for them to take their act on the road.

And that’s just what they’ll be doing, thanks to Wes Guidry, who organized the November Wall concert in DC, and has now taken the reins as Blue Eyed Soul’s manager. 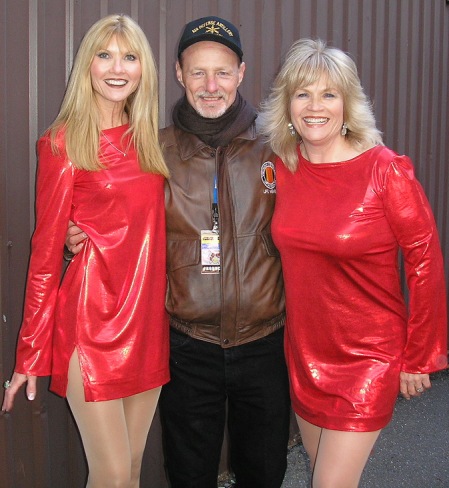 And what surer sign could there be in today’s world that BES has hit the big time than the fact that they now have their own website. There, fans can view photos, read background information about Michelle and Lindsay, and discover where they’ll be touring — and event organizers and venue operators can inquire about booking them for performances.

To eye this soulful new site for yourself, follow this path to the blue horizon:

Comments are always welcomed. To leave one, please visit the Comments section and look for the button a few paragraphs down from the top of the page.

This entry was posted on Thursday, January 24th, 2008 at 2:16 pm and is filed under Uncategorized. You can follow any responses to this entry through the RSS 2.0 feed. Responses are currently closed, but you can trackback from your own site.