Out Of The Blue, New Act Eyes Soulful Reunion

Wes Guidry, the man steering the Wall Anniversary entertainment program, has put together a buoyant little video montage that will be used to introduce Blue Eyed Soul at Saturday’s concert.

Fresh off the editing console, here’s an exclusive look at it for visitors to the Super Site:

It’s been about 12 years since they’ve seen one another face-to-face, and close to 35 since they last performed together. But just a few short weeks from now, they’ll be sharing center stage once again, and in the process, writing a new chapter in the history of the girl groups that had their genesis on The Dean Martin Show.

For Michelle DellaFave and Lindsay Bloom — familiar faces and voices from Dean’s series reuniting to form a brand new dynamic duo called
BLUE EYED SOUL — this will be an experience filled with senses of both déjà vu and fresh promise. 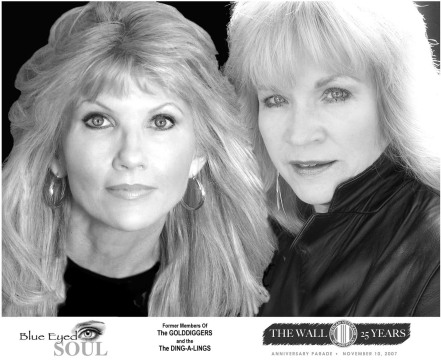 Making its world premiere at the entertainment program lined up for the 25th Anniversary commemoration of the Vietnam Veterans Memorial Wall in Washington on Saturday, November 10, this new combo — the first to branch off an existing group of female singer-dancers from Dean’s show in more than a generation — will join well-established sister acts The Golddiggers and The Dingaling Sisters, already slated for the concert to be held on Saturday, November 10 at the Sylvan Theater in Washington, DC (see http://thegolddiggers.wordpress.
com/2007/10/11/golds-and-dings-salute-uncle-sams-finest).

As is well known to loyal viewers of Dean’s series, (not to mention, attentive visitors to this website), Blue Eyed Soul’s Michelle DellaFave enjoyed lengthy stints as a member of both The Golddiggers and The Dingaling Sisters. She was picked to be one of the original performers in the latter quartet when it was spun off from The Golddiggers in 1970, and was also part of the valedictory set of Dings when they graduated from Dean’s show in the Spring of 1973.

It was while with The Dingalings that Michelle met the other new Blue Eyed Soul inductee, Lindsay Bloom, who bore the distinction of being the final girl chosen for The Dings. Like Michelle when she auditioned for The Golddiggers, Lindsay beat out a slew of contenders for the coveted spot of being a part of Dean’s weekly get-together.

While going their separate ways after The Dings took their final bow, all of the gals who made up that final foursome remained friends through the years, and Michelle and Lindsay stayed in touch as each continued to pursue her own career and eventually started a family.

Following a performance by three of the four original Dingaling Sisters that brought down the house at the annual convention of the Vietnam Veterans of America this past July, the organizer of that event, Wes Guidry, sought to recreate The Dings’ magic, and then add to it, for the upcoming Wall anniversary celebration.

So first, the three 1970-71 Dingalings — Michelle, Susan McIver and Wanda Bailey — were brought on board. Then seven of the gals who served with The Golddiggers between 1968 and 1973 — Michelle, Susie, Jackie Chidsey, Suzy Cadham, Sheila Mann, Rosetta Cox and Nancy Reichert — joined the party. And now rounding out the bill and bringing it full circle is Michelle and Lindsay, two of the four Dings during Dean’s 1972-73 season, fronting the just-formed Blue Eyed Soul.

It was Wes who devised the name for this new pairing, and it’s a sobriquet that appears tailor-made for the two ladies to whom it refers. To see the immediate connection, one has only to gaze into each star’s sparkling baby blues and remember Michelle’s turn from 1972-74 as one of the two Soul Sisters on The Wacky World of Jonathan Winters.

But the Blue Eyed Soul moniker also has its roots in the innovative hybrid of rock ‘n soul made famous by 1960s icons The Righteous Brothers. That mantle was later picked up by another legendary musical dyad, Darryl Hall and John Oates, who went on to become the best-selling pop duo of all time. However, Michelle and Lindsay are making history as the first female twosome to follow in such hallowed footsteps.

SOULFUL HERITAGE: The Dingaling Sisters perform live during one of the stops on their 1973 road tour. (above, l. to r.) Lindsay Bloom, Jayne Kennedy, Michelle DellaFave, and Helen Funai

And who are some of the female forerunners that have influenced this accomplished pair of women?

But as richly gifted a singer as she is, Michelle’s talents hardly end there. As she demonstrated in her years with The Golds and Dings and beyond, Michelle is also a stupendous dancer, she paints and designs, has a solo album of cover songs now in release, and with a slew of critically-acclaimed lead roles in legitimate productions to her credit, she’s proven herself a compelling presence in every medium that she’s graced.

For Lindsay, a lot of initial inspiration came from some of the slinky singer-dancers that preceded her on the entertainment scene — figures such as Juliet Prowse, Ann-Margret and Joey Heatherton (just placing those three names side-by-side is enough to set our heads spinning).

Of course, Lindsay also has great admiration for a performer who was one of her mother’s idols, Ginger Rogers. In fact, Lindsay not only had the chance to work with Fred Astaire’s distaff dance partner on Dean’s show, but also emulated her career path by segueing into acting roles, both in feature films and on television, most memorably essaying the part of Velda, secretary to Stacey Keach’s private eye character on the long-running CBS drama Mickey Spillane’s Mike Hammer.

Resulting from the tour de force performance that Michelle gave at the VVA convention in July, audiences at the upcoming Wall Anniversary concert will be treated to a full half-hour show by Blue Eyed Soul. Together, Michelle and Lindsay will perform “Got To Get You Into My Life”, “Fever”, “(You Make Me Feel Like) A Natural Woman”, “These Boots Are Made For Walking”, and “Proud Mary”.

Individually, Lindsay will sing “I Feel The Earth Move”, the Carole King hit that was her solo number when The Dings did their road tours in the early 70s. For her spotlight tune, Michelle will probably go with “Me and Bobby McGee”, which she performed with Lonette McKee when the two were Soul Sisters — although she might still opt for either “Spinning Wheel” or “God Bless The Child”, two tracks that can be found on her current album, Cool Burn.

With Susie and Wanda, Michelle will reprise the energetic “Funky Chicken” that The Dingalings perfomed this past July for the VVA and in 1970 as part of Bob Hope’s USO Christmas tour of Southeast Asia.

And — assuming she has a chance to change costumes and catch her breath in between sets — Michelle is also scheduled to join Susie and the five other Golddiggers on “Welcome To My World”, “Strike Up The Band”, “You Make Me Feel So Young” and Bob Hope’s signature tune, “Thanks For The Memory”. 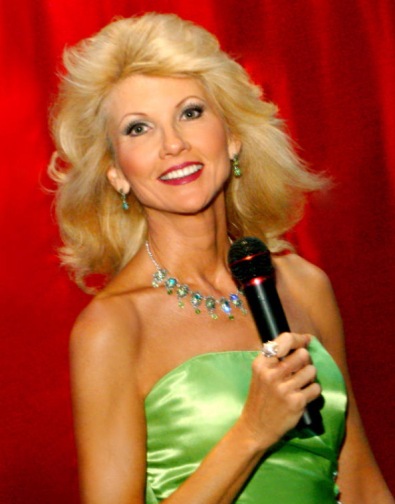 TWO TO KEEP AN EYE ON: Michelle DellaFave (above);
Lindsay Bloom (below)

So what could have lured Lindsay back to the stage after all of this time, and have both her and Michelle so electrified with enthusiasm and excitement about their upcoming performance?

Well, for starters, they’re both overjoyed at the prospect of working together again, an opportunity for which they thank God, as well as express gratitude to Wes Guidry, military veterans, and fans of all stripes.

There’s a real chemistry between Ms. DellaFave and Ms. Bloom, both on-stage and -off, and audiences are bound to take notice of it.

But for both women, this engagement is much more than just another show business gig or even an occasion for a happy reunion. Each has her own very personal and heartfelt reasons for wanting to be involved in this particular event, owing to a reverence for those who defend our country.

Lindsay had two uncles who served in Vietnam, one of whom was quite seriously wounded in combat. She’s watched the struggle that he’s endured ever since, and also saw the way that many Vietnam Vets were scorned upon their return to the States, during a very different era in our nation’s history.

Michelle’s Mom and Dad actually met during World War II while entertaining troops as part of a USO show, and Michelle herself, of course, participated in two of Bob Hope’s USO tours — in 1969, with The Golddiggers, and in 1970, with The Dingaling Sisters. What she found especially touching when she performed for attendees of the VVA Convention this past July was how many of the vets remembered her and recalled in specific detail The Dingalings’ original appearance all those years ago.

So both of these very giving and caring women view the upcoming concert as a way to personally honor those who gave and sacrificed so much for their country during a time of enormous internal conflict within our own society. And their commitment extends beyond just taking to the stage for this one afternoon: In addition to all that they’ve done on behalf of American service personnel through the years, the day after the concert, Michelle and Lindsay will be visiting, and doubtless bringing cheer, to soldiers at the Walter Reed Army Medical Center.

Now, even if you haven’t already made your plans to attend the Wall Anniversary concert on November 10, there’s still time. And remember, everyone is invited, and there’s no charge for admission.

Here’s the VVA web page that provides full details of all of the entertainment that will be featured at the event, and even assistance with accommodations:

With The Golddiggers and The Dingaling Sisters performing, there were already 8 great reasons to go. Now, with the addition of Blue Eyed Soul, there are 2 more.

The soul remaining question is: When those crystalline blue eyes look out into the crowd, will they be meeting yours?

There are more vintage photos of The Dingaling Sisters on the road in 1973 on display in the Photos section of the GoldsAndDings Yahoo Group, but to see them, you must be a member. To join for free, click here: http://groups.yahoo.com/group/GoldsandDings

Comments are always welcomed. To leave one, please visit the Comments section and look for the button a few paragraphs down from the top of the page.

This entry was posted on Tuesday, October 30th, 2007 at 10:09 am and is filed under Uncategorized. You can follow any responses to this entry through the RSS 2.0 feed. Responses are currently closed, but you can trackback from your own site.